When you carry out 5 searches with YouCare you allow to finance the planting of 3 cm² of coral reefs.

To help restore coral reefs, YouCare provides financial support to Coralive.org, which works to restore the coral reefs most affected by human activities.

Click here to locate the coral reefs on which Coralive.org respond.

To restore corals, Coralive.org performs coral cuttings on steel structures. These structures are placed in seawater basins to monitor coral growth for 3 years.

Once the corals are mature, Coralive.org transplants the steel structures near the coral reefs so that the corals can continue to grow and multiply in their natural environment.

Discover in video the work of restoration of coral reefs by the association Coralive.org.

What is the cost of restoring 1 cm² of coral reefs :

The calculations below are based on the information provided by Coralive.org.

A steel structure such as the one below costs 345 euros and allows to restore 10 square meters of coral in 3 years.

By performing 1 search with YouCare, you generate 0.22 euro cents of advertising revenue for the good deed that you support. Since the cost of restoring 3 cm² of coral reefs is 1.1 centime of euro (1.1 divided by 0.345 equals 3.18 rounded to 3), you just have to do 5 searches to finance the restoration of 3 cm² of coral reefs. 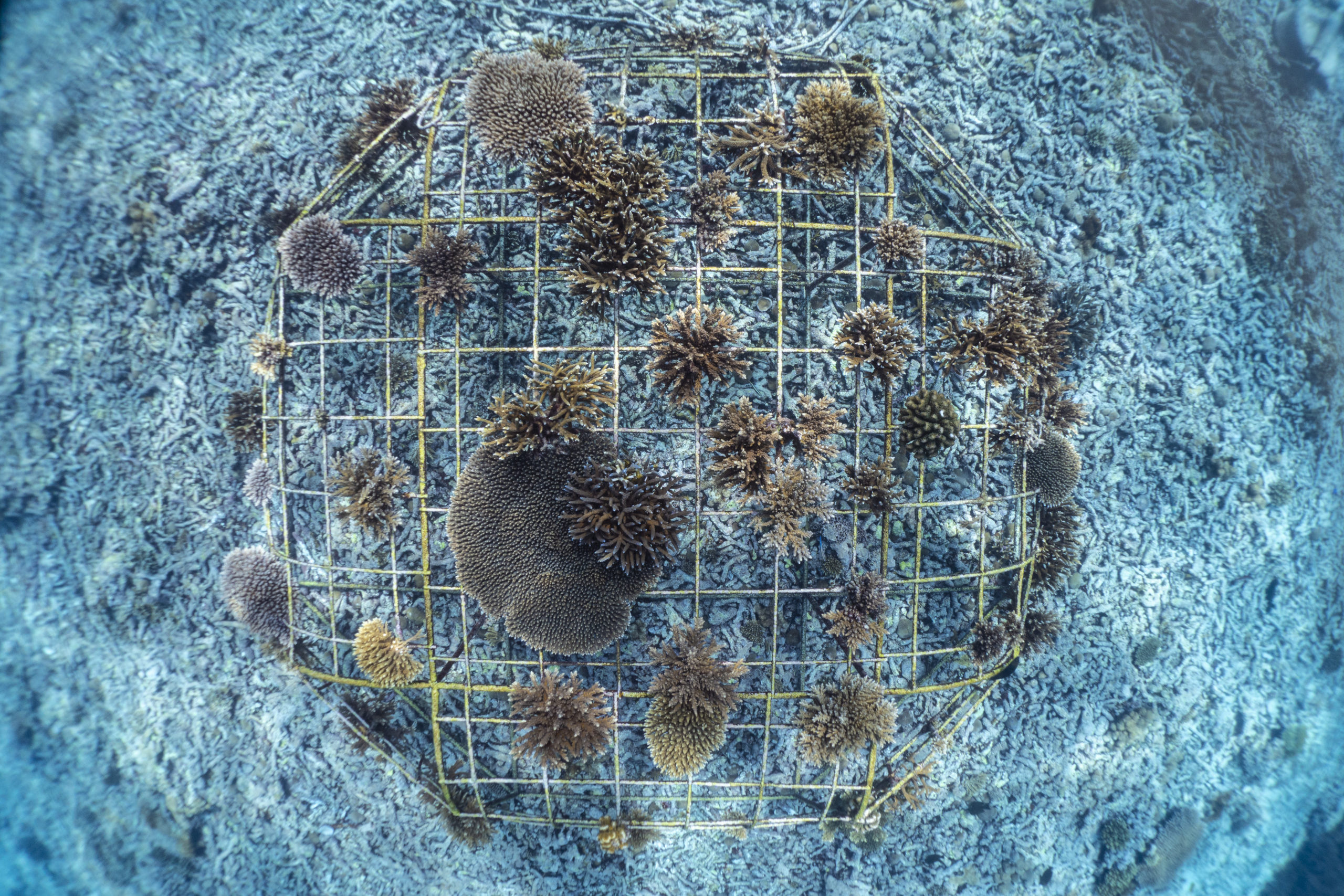 To learn more about YouCare’s revenue streams, visit this page: How does YouCare finance good deeds ?

The state of the seabed is critical :

Here are all the assaults facing the seabed and it is urgent to act!

An ocean of plastics

More than 8 million tonnes of plastic waste are dumped into the oceans each year.

To better represent this volume, it is the equivalent of a garbage truck full of plastic that is dumped every minute into the oceans. At this rate, in 2050, as the world’s population approaches 10 billion people, there will be as many tons of plastics in the ocean as there are tons of fish.

It is important to know that marine plastics are fragmented according to ocean forces and transform into microplastics (> 5 mm) and then nanoplastics. Microplastics contaminate the air we breathe, the food we eat and the water we drink.

According to a Newcastle University study published in June 2019, a human being could ingest about 5 grams of plastic every week.

This study shows a list of common foods and beverages containing microplastics, such as water, beer, seafood and salt.

The long-term effects of ingesting large quantities of plastic on our health are unclear, but studies are underway.

Studies show that if today no plastic waste ends up in the oceans, then 15 years of clean-up would be needed at the rate of current efforts to rid the oceans of all our plastic waste.

This industrial fishing method involves scraping the seabed. Trawling is a technique that, according to a study published last May in the journal Fisheries Research, is also the greatest cause of waste. 437 million tonnes of fish have been discarded at sea by bottom trawlers in the past 65 years.

In addition, as Le Journal de l’Environnement explains by dragging large nets into the seabed, “they catch on their way corals, sponge beds and unwanted fish species” and thus disrupt the ecosystem of exploited areas and deplete our seabed by annihilating species that have taken several centuries to develop.

A single cigarette stub can pollute 500 litres of water. Last September, a study revealed that cigarette stubs won the sad prize of the most littered litter.

Because their filter is made of plastic, it can take decades to decompose, leaving them plenty of time to be ingested by marine life.